The Myth of the Age of Entitlement
James Cairns
University of Toronto Press, 2017

Whenever I hear the “entitled millennials” trope, I think of a nebulous magazine or newspaper cover. Maybe it’s Maclean’s; maybe it’s the Globe and Mail. It features a young white woman, spoiled and styled to elicit my scorn. And she wants things handed to her – everything from new tech toys to a university degree. Her parents pay at least some of her rent.

The myth of entitlement has been created to be a new hegemonic tool to maintain an economic status quo that only works for very few people. Entitled millennials make disenfranchised baby boomers see red.

James Cairns tackles this head-on in his book The Myth of the Age of Entitlement. From funding cuts in universities to Black Lives Matter, Cairns demonstrates that the fight for entitlements lies at the heart of what social struggles have always aimed to address.

Cairns’ argument relies on understanding the difference between democratic versus oppressive entitlements. The latter, he says, requires one or more of the following elements: that there is a “feeling of deservingness or institutional support rooted in social hierarchies,” that there are institutions that treat people as individuals exclusively, and that the entitlement “stunt[s] the development of the conditions necessary for more fully and widely meeting human needs.”

On the other hand, democratic entitlements “involve forms of deservingness that challenge existing systems of inequality” and fight for more “political and economic equity.”

Through this lens, millennials (or generation Y) are more often fighting for democratic entitlements and against oppressive entitlements than we are demanding the kind of entitlements that Margaret Wente might write about. Each chapter reads like a stand-alone article to elaborate this vision, and Cairns pulls lessons from situations like the Quebec student strikes, the movement to elect Bernie Sanders, and environmental struggles. Throughout, he sprinkles the dense, academic prose with anecdotes from young people about the daily challenges that they endure to get by.

The flow of The Myth of the Age of Entitlement is challenging. There’s no single location in the book that takes full stock of the myths of entitlement, from economic lies to trigger warnings. Rather, they’re referenced throughout and in various contexts. In some places, examples of activism don’t quite square with the language of millennial entitlement. For example, one of the criticisms levied against Black Lives Matter, says Cairns, is that they’re simply entitled millennials. I found myself disagreeing, as I more often than not see racist arguments levied against BLM. I don’t think I’ve seen the entitled millennials myth used in this way.

The trouble with millennials is that as a cohort, we’re hardly homogeneous. While Cairns discusses gender, race, and class differences, he doesn’t spend enough time defining who millennials are: are we an invention of politicians or of a marketing firm? Are we all as old as 35 and as young as 14? What are the differences in experience and activism between the generations who came of age on either side of 1999? Cairns conceives both of them to be part of the millennial cohort, but the experiences of each group are very different.

The trouble with millennials is that as a cohort, we’re hardly homogeneous. While Cairns discusses gender, race, and class differences, he doesn’t spend enough time defining who millennials are.

The myth of entitlement is a tool to divide and conquer young people, and it’s employed however and wherever it’s needed. It makes defining millennials difficult, but defining that category is necessary. Cairns could elaborate more on the social, economic, and political class of people whom he considers to be part of this cohort in order to better flesh out his argument.

The benefit of interrogating the intergenerational character of so many movements that Cairns mentions is to show the solidarity and creativity that arise when generations fight and learn together. Cairns writes about the fast food worker strikes that swept the U.S. starting in 2012. He mentions that fast food workers “make up one of the largest sections of the U.S. labor force,” and that 60 per cent of these workers are from generation Y. But that leaves a solid 40 per cent of workers who are older and who are living on basement-level wages. What were the forces bridging the generations that made these movements so successful and powerful?

Referencing the Fight for $15, Cairns writes that it’s “a case study demonstrating the co-development of working-class material and emotional entitlements,” and he goes on to argue that these campaigns will necessarily need to grow to include “not only workers of all ages across industries, but waged and unwaged workers, unionized and nonunionized workers, migrant workers, low-income workers, as well as more privileged layers of the working class.” I agree, but it leaves me wondering: what’s the role that the myth of entitlement plays in this, if any?

The Myth of the Age of Entitlement helps to puncture the invented entitled status that has been foisted onto millennials and provides an array of examples where millennials are bucking this myth, demanding their democratic entitlements, and telling the Margaret Wentes of the world to STFU (an acronym that Cairns also helpfully spells out on page 133). 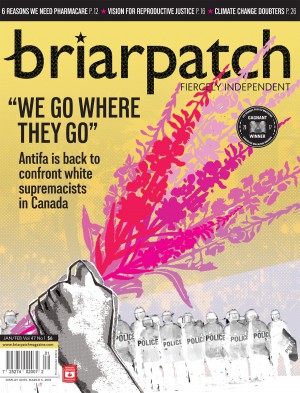