I have been organizing with Justice 4 Black Lives Winnipeg (J4BLW) since its inception in May 2020. That year, I planned, participated in, and led several public actions in support of police abolition and Black liberation alongside fellow organizers Ella Taylor, Kameshia Hope, and Mahlet Cuff. I was also the sole author of J4BLW’s petition, which garnered over 120,000 signatures. The petition’s demands include defunding and abolishing the Winnipeg Police Service; more Black history in school curricula; and justice and support for local families whose loved ones have been killed by police – like those of Machuar Madut and Eishia Hudson.

In the media whirlwind that was June 2020, I was quoted in a CBC article saying, “You can see change happening before your very eyes. […] We’re definitely making progress, but this is just the beginning.” At the time, I was certain that the city and the province would meet our demands, at least in part – after all, the same day the CBC article came out, J4BLW held a rally with an estimated 20,000 people in attendance, backing up our calls for justice. How could so many voices be ignored? How could so much momentum stall?

During this time, Nwofor feels like there was a shift from one tactic to another: from denial of racism to performance of anti-racism.

Almost two years later, we’ve seen little progress across the Prairies: police budgets continue to grow; discourse about abolishing the police is virtually non-existent in policymaking spaces; and emotional, social, and financial support for Black grassroots organizations and organizers has dried up.

Adora Nwofor, creator of Calgary’s first BLM chapter, tells me that “The summer of 2020 was intense for life, never mind organizing. Every day there was a demand for reaction – whether it be to a new incident, to [a request for] support, or [to] a critique of BLM.” During this time, Nwofor feels like there was a shift from one tactic to another: from denial of racism to performance of anti-racism. Both of these tactics mean that anti-Blackness is not being addressed with any meaningful action; both fail to change the conditions of poverty, policing, and systemic discrimination that stifle Black lives.

In 2020, as donations poured in to Black-led grassroots groups, organizers channelled that money into supporting local Black communities: funding scholarships, mentorship and tutoring programs, food baskets, clothing hampers, and more. But by the summer of 2021, Black Prairie abolitionist groups saw donations slow to a trickle and then sometimes a complete halt. As a result, many projects and initiatives were forced to end as well.

By the end of 2020, each active member of J4BLW was leading an initiative, and from June to December 2020 J4BLW received and redistributed over $100,000 in donations. I ran a community hamper project providing food, kids’ toys, and other basic necessities to Black and Indigenous folks. Ella Taylor managed a fund that disbursed money directly to Black sex workers. Mahlet Cuff managed a similar fund that financially supported Black trans and queer folks. Kameshia Hope began a mental health initiative for Black youth. We sustained these projects for as long as we could, but by the summer of 2021, all those projects had to be put on pause when the donations dwindled.

These programs by J4BLW and other Black Prairie abolitionist organizations were and still are desperately needed. Black people who accessed these resources are not suddenly in less need of support, they are now just forced to go without once again.

In 2020, after George Floyd’s death at the hands of Minneapolis police sparked a massive uprising to protest racist police violence, many politicians became very vocal about anti-racism. Suddenly, they seemed interested in grassroots demands to defund the police and redirect that money to community supports.

“I think it’s incredibly important for elected officials to be there to listen and hear what’s being communicated,” Winnipeg Mayor Brian Bowman told CBC, announcing his plans to attend a J4BLW rally in June 2020. “I’m not going to be speaking. I’m not planning on doing any interviews. I’m there to listen.” He encouraged other politicians to attend and thanked J4BLW organizers for “doing their part to move our community forward.”

In Edmonton, then-mayor Don Iveson published a post on his personal website in which he wrote, “I can say I have long agreed with the premise that we cannot police ourselves out of systemic racism or societal injustices and challenges like poverty, addictions, mental health and trauma. We do need systems change and we do need culture change and I believe City Council is open to suggestions. We are still listening and learning. Action, with due consideration, comes next.”

Every additional dollar spent on the police is a dollar stolen from the resources that would actually make Black and Indigenous communities safer.

At the time, it sounded like Prairie political leaders were seriously considering defunding city police forces – but it turns out they were just making empty proclamations to distract from what would come next.

Demands to name, fire, and strip benefits from the officers who abuse and murder community members have been unmet. Winnipeg police patrol sergeant Kevin Smith has been caught on camera several times, between 2018 and 2020, verbally assaulting Black and Indigenous people and abusing his position of power while on and off duty. There have been multiple complaints filed against him, and the Winnipeg Police Service paid out $13,500 in damages to settle a lawsuit against him by a man who says Smith illegally searched his bag and slammed his face into the side of a car. Smith has not been fired and is still actively policing Winnipeg streets.

"I want a city where people understand why these things are far more valuable than property or police could ever be.”

“Our communities are starved for funding while the city pours its funding into an institution that revolves around harm,” says Ella Taylor, an organizer with J4BLW. “I want a city where policing is not prioritized over ending homelessness, [over] health care, harm reduction, and treatment for people struggling with substance use. […] I want a city where people understand why these things are far more valuable than property or police could ever be.”

In 2021, at a budget council meeting, Winnipeg Mayor Brian Bowman said that he does not agree with abolishing the police and that he believes the police “do incredibly difficult and dangerous work in our community.” The message went from “abolish the police” to the less radical “defund the police” to simply “let’s keep doing the same things as before.”

“What I have to share with you, over a year later, is how exhausted I am,” says Taylor. “It feels like we have organized countless events, rallies, marches, protests, community actions, and the like for almost no material change. I am exhausted. I never want to learn another name of someone who has died at the hands of the police. I want there to be no new names to learn. I want to forget how exhausted I am because I want this fight to be over. I want every time to be the last time we ever have to.”

Taylor, like most Black abolitionist organizers, isn’t paid for this work. They have a paid job, are a student, and have family responsibilities to tend to as well. When organizers do not receive the proper support, they can easily burn out and lose motivation.

Public actions – like protests, marches, direct action, and press conferences – are one aspect of community organizing, and these were important for getting media attention, pressuring politicians, and spreading radical ideas in 2020. But there’s another, equally important part of community organizing: building relationships. This looks like spending time with and financially supporting community members, and it’s work that must be done in private in order to preserve the trust and safety of those involved.

“If people want this kind of team, we need emotional, financial, and social support.”

In the best-case scenario, a grassroots group has enough money, organizers, and support to both pull off public actions and build strong relationships behind the scenes. But when resources and energy are thin on the ground, organizers have to pick between the two. And it’s easy to prioritize public actions – large-scale protests have become necessary to remain in the public eye and shore up the media attention and donations that allow for relationship-building work. We’ve faced this tough choice at J4BLW this year, with organizers feeling like they must capitalize on every moment with public actions. But it’s draining and plays into the white supremacist cultures – of individualism, competition, and urgency – we are actively fighting.

“Organizing means we need many skills, as well as a strong, healthy, and well-rounded team,” Nwofor explains. “If people want this kind of team, we need emotional, financial, and social support.” Organizers and their respective grassroots organizations need support all year round. Not just when it is easy, convenient, or beneficial for you.

Anti-racism work is not just the responsibility of Black people – it is a collective responsibility. Turn post notifications on for your local Black organizers, artists, and Black-led groups as a reminder to share their posts consistently. Share their calls for help and donate whenever you can. Encourage those around you to donate. When paid opportunities present themselves to you, consider passing them off to Black organizers, artists, or speakers. Your care and concern for Black folks must become second nature.

The same energy that you had for Black liberation in the summer of 2020 needs to be the energy you keep every single day.

“When we [as organizers] receive consistent support and acceptance, we can reach more of our goals with positivity, which means more people can be impacted,” says Nwofor. “Many organizers and organizations are not currently active – they are struggling with their mental health and are feeling overall disappointed. Acceptance and support means that we are able to address people’s basic needs and improve team capacity so that it isn’t the typical one or two people bearing the brunt of the work.”

When Black people aren’t speaking up about a city budget or putting public pressure on politicians, you still can and should. Amplify Black voices first and foremost, but make sure to use your voice as well. Find ways to create your own initiatives to support your community or join ones that are already out there. The same energy that you had for Black liberation in the summer of 2020 needs to be the energy you keep every single day.

If politicians aren’t feeling the heat of public pressure, if we don’t put up a fight against ballooning police budgets, if we don’t begin to build our own alternative systems of safety and community care, we will see no positive changes to the lives of Black people on the Prairies. Instead, as the police win more money, weapons, and impunity, our communities will face ever greater danger. Life can be hard for Black organizers, especially on the Prairies, so be sure to support them wherever and whenever you can. 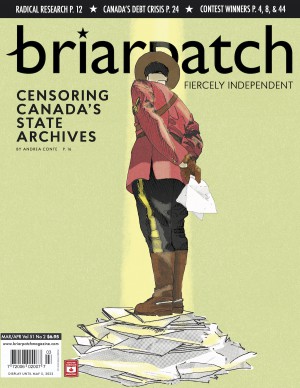