The plan: save money, buy land, build a house, grow food, heat with wood, quit jobs, and self-sustain­ — all without going into debt.

Although I was raised in the suburbs of Montreal, my life today resembles that of my Mennonite ancestors. In the winter I bathe in a tub of snow (melted and heated first, of course). I live in a one-room house without electricity or plumbing. I do my business in an outhouse, or sometimes, to my wife’s displeasure, in the great outdoors. I cut and chop all of my own firewood, and gather twigs almost daily for kindling. It’s hard work, but it pays off. The earth isn’t the only beneficiary of this lifestyle, either; this is my ticket to financial independence.

I’m often labeled a tree hugger. Truth be told, that isn’t far off — I love trees and have been known to hug them from time to time. But the real question is: am I an environmentalist, or am I just frugal? Let’s put it this way: I still mourn the loss of the coins I buried in the backyard as a kid and never found again. Mennonite jokes aside, I am stingy by nature.

However sympathetic I am to the environmentalist movement, on the ecological Judgment Day I might get by on a technicality, but that’s about it. When it comes to reducing my footprint on the earth, I suppose I’m doing my part, but incidentally. I reduce and reuse, but I don’t recycle — in Canada, that’s mostly a city privilege. I swallow gum instead of spitting it out. I buy local because it makes me feel good about myself, but only when it’s convenient. I don’t eat organic because it’s expensive and has spots. I’m an anti-consumerist because I can’t stand clutter or spending money. I eat a vegan diet, but it has nothing to do with the environmental impact of an animal-based diet and everything to do with a mental block around ingesting any part of anything that had a mother.

What motivates me, frankly, is money: the having of it, and the freedom from it. For me, money represents a ticket off the hamster wheel. Coming out of university as a model of right-brained mediocrity, I knew I would have to get creative if I didn’t want to spend my life as an over-educated customer service representative struggling to maintain a debt-laden, middle-class lifestyle.

At the age of 24, I decided that I was young and naive enough to risk experimenting with financial independence. My wife and I-both dangerously educated and idealistic-had just spent all our money on a month-long crocs’ll-getcha wilderness roam in Australia, returning to Canada with blisters, sore backs, no jobs, and no home. With our heads filled with notions of utilitarianism and radical freedom, we decided to re-enter the rat race with the sole purpose of escaping it.

The plan: save money, buy land, build a house, grow food, heat with wood, quit jobs, and self-sustain. And try to do it all without going into debt.

Our beginnings were modest. With no money, no credit, and no jobs, we couldn’t even get an apartment. My father had to co-sign our lease, as though it were a grade-school permission slip, so that we could live in a Barbie-sized bachelor apartment a stone’s throw from a penitentiary and several ex-con neighbours.

We both found jobs in the $25,000 to $30,000 salary range and relied heavily on bikes and buses for transportation. After 12 months of peering through the blinds at the illegal activities next door, our lease was up and we had $30,000 in the bank.

By that time we had found the perfect piece of land: 10 organic acres of Canadian Shield on a charming country road, secluded from the neighbours but close enough to be able to borrow their tools. At nearly an hour’s drive from the city, living there would mean a commute to work, but it also meant an affordable price tag. Our first offer was accepted at $27,500.

All that was left was to build a house. With only $2,500 left in the bank, we could either renew our apartment lease (and hope our neighbours didn’t find out about the six letters of complaint we’d lodged against them) or we could turn to the banks for money. It would mean breaking one of our cardinal rules, but after a year in hell we were a little less reluctant to sin.

With no collateral, loans were out of the question, and we were unable to secure a mortgage for a home without plumbing, electricity, or insurance. The most the bank would give us was a $30,000 line of credit. With another $10,000 available on our credit cards, we had a budget of $40,000 to build our dream home. To thicken the plot, it was late November, and my wife and I had about one month left in our temporary house-sitting arrangement before our welcome wore very thin.

That was when I realized I had no idea what I was doing.

We’ve all read the stories in National Geographic: green architects designing complex, eco-efficient, self-sustaining homes, or environmentalist carpenters building their own houses, complete with an innovative greenhouse system for their nutrition-scientist spouses to grow food year-round-each one a highly skilled, big-budget, first-of-its-kind project. And then there were the hermits, hiding themselves away in the woods, eating bugs and beans, growing long beards, going crazy, and inventing new languages. With no money, no practical skills, and never having been able to grow a beard, I had to consider whether there was a place for me in the world of voluntary simplicity.

A few intense moments of soul-searching brought some clarity: I would take the road between skilful innovation and madness. I would just do it, one step at a time.

I purchased the cheapest architectural design software I could find. After several radically uninformed experiments in design, I submitted my building plan to an architect for approval. The result of my first foray into architecture: a cube.

A single-storey cube turned out to be the most cost-effective layout for the house. With a shallow-sloped roof, standard-sized windows, and no interior walls, the total cost of building materials came in under $15,000.

Now that I was ready to build, the next step was to befriend the building inspector. This turned out to be easier than I thought and laid the foundation for my overall project strategy: relying on my compellingly pitiful ignorance to recruit help from others.

Somehow, everything rolled out from there. A good carpenter was recommended, a little pricier than some, but he would bust a gut for you. And he did, fitting the project in on weekends between other, bigger projects. I talked him into installing the siding and the shingles, and through the power of pathos, talked his wife into installing the insulation and vapour barrier for me.

The excavator had been equally accommodating, working early mornings, late evenings, and in wet and freezing conditions to complete his work in a matter of days. In addition to the work I paid him to do, the excavator expanded our gravel driveway, threw in a culvert, and had me over for tea so his wife could give me a cooler full of food. (Even I admit I might have overplayed that one.)

It was not without astonishment that my wife and I moved into our new home just four weeks after construction began. It had the sort of ambience that only chalky drywall and pressboard flooring can offer, but it was ours, and we had never felt richer than we did that Christmas as we huddled on a mattress eating brown beans by the wood stove.

“At our current rate of saving, my wife and I will be debt-free and in full possession of 10 acres of land, a custom-built house, and a new car before we both turn 26.”

The lap of luxury

For over a year now, we have enjoyed a lifestyle of true luxury: the fresh air and quiet beauty of the country, a cozy, mortgage-free home, and all of our needs more than met by the world around us. In addition to the view from our windows, the earth offers us our food, our water, our heat, and even our solar electricity.

The cost of our freedom: forsaking a few for-granteds in exchange for hard work and creative inconvenience-well water refrigeration and Coleman stove fine dining, for instance. But by day we still clean up nicely and re-enter the corporate world, blending in undetected among toilet-sitters and tap-turners.

Meanwhile, the only fixed expenses we have each month are our cell phone, our car insurance, and our land taxes, amounting to $200 per month combined. Add to this what we typically spend on gas, food, and a few non-essentials, and our monthly living expenses rarely pass the $1,000 mark. At our current rate of saving, my wife and I will be debt-free and in full possession of 10 acres of land, a custom-built house, and a new car before we both turn 26.

As long as our uninsured house doesn’t burn to the ground, I intend to retire this year in the comfort of financial security and in the lap of the simple life. That ought to afford me a half-century or so to chop wood, grow food, and maybe, just maybe, think about writing from time to time.

And if the house does burn down, well, we can always start again. 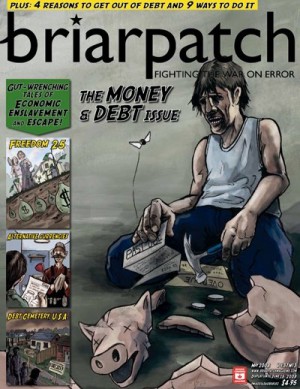