From the kitchen window of my sister’s home in Iqaluit last July, I watched chunks of ice, remnants of once-mighty glaciers, float along the coast of Frobisher Bay. The taxi honked and I stepped outside. Mosquitoes instantly swarmed my head. In the summertime in Iqaluit, the capital city of the Inuit-administered Canadian territory of Nunavut, swarms of insects hover above the inhabitants like cartoonish clouds of gloom as they go about their day-to-day lives. From the window of the taxi I watched local children, equipped with electric racquets, as they gleefully toasted these summertime pests.

I directed the taxi to the Sylvia Grinnell Territorial Park located on the outskirts of the city.

“Why did you come to Iqaluit?” I asked my Québécois taxi driver as he pulled up to the park’s entrance.

Again and again I heard this same refrain from every non-Inuit living in Nunavut. The growth rate of Nunavut’s economy, a whopping 13 per cent, surpasses that of oil-rich Alberta. Yet the territory’s unemployment rate is 10.8 per cent, well above the Canadian average of 6.2 per cent. This rate soars to over 20 per cent among the Inuit, the original inhabitants of Nunavut, while Nunavut’s non-Aboriginal population benefit from a four per cent unemployment rate.

My perspective from the park’s entrance was a barren panorama, a chain of rocky hills. Looking out, I reflected on what it might mean to be from this place. Nunavut, “our land” in Inuktitut, was the result of more than 30 years of negotiations and planning by the Inuit of the Eastern and Central Arctic. So why are these original inhabitants, the overwhelming majority of people in the territory, not the principal beneficiaries of their land’s economic development?

At least part of the problem can be chalked up to the failures of the current education system. Only 25 per cent of students in Nunavut ever complete high school. This is the lowest graduation rate in the country; in comparison, the national average is 76 per cent. Many in Iqaluit blame this disproportionate academic failure rate on an incompatible Euro-Canadian school system based on Western rather than Inuit culture.

The Inuit have a rich tradition of education – a heritage that is based on knowledge being passed from generation to generation through watching and learning from their Elders. Because theirs is an oral tradition, the Inuit language is central to the transmission of their culture. A 1939 ruling by the Supreme Court of Canada determined that the Inuit should be classified as Indians and subject to the jurisdiction of the federal government. Residential schools followed. This introduction of the residential school system in the Arctic deliberately sought to silence Inuit language, culture and world view, and in many cases succeeded. It is little wonder, then, that some Inuit parents, themselves survivors of residential schools, are distrustful of the current system and have turned their backs on it when it comes to educating their own children.

According to the Nunavut Land Claims Agreement, the treaty between the Government of Canada and the Inuit people that resulted in the establishment of Nunavut as a territory, Inuit must be represented in proportion to their presence in the population in all areas of the public service. As 85 per cent of Nunavut’s population is Inuit, 85 per cent of the civil service should also be Inuit. In 1999 when Nunavut was established, the Nunavut Implementation Commission proposed 2008 as the year by which representative levels were to be achieved in the public service. However, the shortage of Inuit high school graduates (the public service of Nunavut requires that its employees hold a high school degree) means that Inuit currently comprise only 48 per cent of public service employees. Seeing that little progress has been made, the goal has been extended by both the federal and territorial governments to 2020.

Since government is the largest single employer in Nunavut, the failing education system has resulted in a painful economic disparity. While the mean annual income for an Inuk living in Nunavut is $13,090, non-Inuit bring in almost quadruple that, with an average annual income of $50,128. To address this disparity, organizations and corporations such as Inuit Tapiriit Kanatami (“Inuit are united in Canada”), which represent and promote the interests of Inuit across Canada, are calling for the introduction of a bilingual education system with an Inuit-centred curriculum. Until this system is in place and convocation rates have risen, Inuit will continue to be under-represented in the public service.

Patricia Ell, a 25-year-old security guard at the legislative assembly spoke to me about the difficulties finding work in Iqaluit. Originally from Cambridge Bay, a small and isolated Inuit community located on the south coast of Victoria Island, she moved to Iqaluit to find a better job. However, with only a grade 11 education, Ell found it difficult. “In Cambridge Bay you can get a job because everyone knows everyone. But here I don’t know anyone and without a high school degree it’s really difficult to find work.”

Back at the Sylvia Grinnell Park, I had my own concerns. Wiping the sweat from my forehead and gazing up at my destination, a simple but striking inukshuk atop a rocky hill, I remained vigilant. Two days earlier a group of schoolchildren had spotted a polar bear in this park. The bear was shot and skinned, its meat distributed throughout the community and its pelt prepared to adorn the main entrance of the school.

The wage-based and subsistence economies

The main sectors of Nunavut’s wage-based economy include the public service, mining, construction, some fish processing plants, and arts and crafts. Lead, zinc, silver, and gold are all mined in Nunavut and, after the public service, the mining sector is the second largest employer in the territory. Non-residents, however, fill more than 85 per cent of the mining jobs.

Natan Obed, an Iqaluit-based Inuk who works for a local advocacy organization, explained the reason behind the lack of Inuit in the mining sector. “Most jobs that don’t require a high school degree cater to types of individuals not living in an Inuit community.” Being a member of such a community entails time-consuming responsibilities and most Nunavummiut (people from Nunavut) continue to sustain themselves through traditional subsistence activities, such as hunting polar bears, caribou, and seals for food and skins. This subsistence economy is an important part of the Inuit way of life, involving roles and responsibilities for each member of the community based on age, gender and kinship. Mining companies, as well as other major employers in the region, target employees willing to work 14-hour days, which is simply not possible for an active member of the community.

Another reason why Inuit are not taking part in the wage-based economy is that the majority of entrepreneurs in Nunavut are English and French-Canadians. From plumbing and cleaning services to taxicab companies, businesses are primarily owned by non-Inuit. Inuit may associate more with the land and its resources than with Western capitalism, but as Obed further explained, “ethnic subcultures” – particularly anglophones and francophones – play a major role in keeping Inuit out of certain jobs. In other words, business owners are more likely to hire those from the same ethnic background as themselves.

One feature of the Nunavut Land Claims Agreement is the capital transfer payments of $1.1 billion, payable to the Inuit over 14 years from the Canadian government. This transfer does not always trickle down to individual Nunavummiut, many of whom rely on employment insurance or welfare to supplement their subsistence activities in order to survive. However, since those receiving welfare often live in deplorable conditions, it would be incorrect to assume that Inuit purposefully opt out of the wage-based economy. In 2001, 20 per cent of Inuit households were considered overcrowded compared to 2 per cent of non-Aboriginal households in Canada. Overcrowding and other problems associated with poor housing have led to a number of health problems such as diseases of the respiratory system. A third explanation as to why Inuit do not join the wage-based economy is that, as Obed explained, “the opportunity cost of a low-paid job is still too high.” Earning a salary often means relinquishing the right to social assistance, including free housing.

The ever-extending tundra stretched out before me. I stood beside the inukshuk, the icon emblazoned on Nunavut’s flag, and thought about how it is that the Inuit no longer benefit from the wealth of their land. 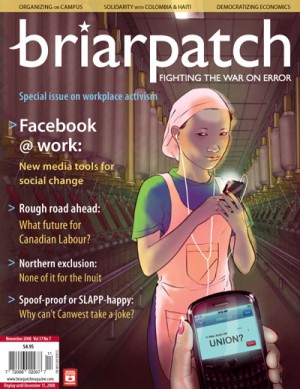