My first doubts about the benefits of ethanol came a decade ago, after a chance encounter on an airplane.

In 1997, I was returning from an environmental conference in Brazil that I had been covering as a freelance reporter. Sitting next to me on the flight was Elizabeth May, who is now the leader of the federal Green Party. She had been at the same conference, representing the Sierra Club of Canada. Even then, her environmental credentials were impressive.

As we chatted, I proudly told her that I always burned ethanol gasoline in my car, because it was better for the planet. I felt rather deflated when she informed me that ethanol’s environmental credentials are dubious at best, since it takes more energy to produce a litre of ethanol than you get by burning it.

Much of the literature I have since read supports Ms. May’s position. But in the intervening years, governments everywhere have managed to ignore this mounting evidence. Instead, they have piled aboard the ethanol bandwagon, plowing significant amounts of taxpayer dollars into the production of ethanol and other “biofuels,” claiming this will help both the environment and farmers’ net incomes.

The economics of ethanol

David Pimentel of Cornell University’s College of Agriculture is a leading authority on this so-called alternative fuel. He was a consulting ecologist to the White House staff in the 1960s, and later chaired an advisory panel on ethanol production for the U.S. Department of Energy.

One columnist has described him as “the most persistent, articulate and scathing critic of the biofuels industry.” In his most recent study earlier this year, Pimentel and a colleague calculated that if all the energy inputs are counted, it takes 1.43 litres of oil to produce one litre of ethanol. When the energy value of distillers’ dried grains, an ethanol by-product, is considered, that imbalance does decrease. But only a little; down to 1.28 to one. The by-product is a fairly high-protein feed for cattle, but of marginal use for other livestock. It is the reason that large cattle feedlots are often attached to ethanol plants.

In 2002, Ken Sigurdson of the Manitoba branch of the National Farmers Union (NFU) issued a stark warning about this model of alternative energy production. “Since ethanol plants are usually accompanied by large beef feedlots,” he wrote, “we can anticipate the same kind of environmental problems and community divisions that we have seen with factory hog barns in the provinces. Any provincial plan to industrialize agriculture with factory hog barns has resulted in divided communities.”

Sigurdson also reminds ethanol boosters that wheat, the primary feedstock for ethanol in Canada, yields much less grain per acre than corn. Therefore, it is going to take a lot more farmland, he reasons, to produce the same amount of ethanol that corn does.

Meanwhile, governments in North America are doing their best to make this dubious experiment work. The U.S. government is subsidizing corn ethanol production at a rate of about $3 billion per year. The trouble is, most of it goes to large corporations who operate the plants, not to the farmers. John McCain, the maverick Senator from Arizona, claims those subsidies amount to seven dollars per bushel of corn, of which the farmer gets only two cents.
David Pimentel believes that without those subsidies, ethanol production would be exposed as economically untenable, and would grind to a halt in short order.

Canada is jumping into the subsidy game, too. About four years ago, Ottawa began the Ethanol Expansion Program as part of its strategy to deal with climate change. The program provides money to build and upgrade ethanol plants. The ten-cent-a-litre federal excise tax on ethanol has been lifted at an estimated cost to the federal treasury of $118 million. Further taxpayer dollars are allocated for research and publicity.

The level of government support has been substantial. According to a recent report in the Saskatoon Star Phoenix, a single plant at Lloydminster, Saskatchewan, has so far received $8 million in subsidies.

Governments are virtually falling over themselves to support ethanol production in other ways, too. By 2010, as decreed by the federal government, all transportation fuel in Canada will have to contain five percent ethanol. Manitoba will require a 10 percent ethanol blend in 85 percent of all gasoline sold in the province by late this year. Saskatchewan has similar plans.

The impacts of ethanol

David Pimentel’s studies conclude that the drawbacks of ethanol extend well beyond its negative energy balance.

“The environmental impacts of corn ethanol,” he writes, “are enormous. They include severe soil erosion, heavy use of nitrogen fertilizer and pesticides, and a significant contribution to global warming. In addition, each gallon of ethanol requires 1,700 gallons of water (mostly to grow the corn) and produces six to 12 gallons of noxious organic effluent.”

In the fermentation process, he claims, every single liter of ethanol produces about 13 litres of wastewater, which must then be disposed of at an additional cost to the public through facilities at water treatment plants. “The negative environmental impacts on cropland, freshwater and air,” he concludes, “aren’t even known yet.”

In its own follow-up study, the U.S. Environmental Protection Agency also found that carbon monoxide emissions from these plants may have been significantly underestimated.

To quote the Minnesota Pollution Control Agency, “The EPA determined that, because of this underestimation of annual emissions, nearly every ethanol plant in the nation had received an incorrect air permit—a permit with pollution control measures intended for much lower emissions.”

Ken Sigurdson of the NFU writes that “these pollutants can be burned off with thermal oxidizers but the process is costly. In the current business climate, we have little confidence in those entrusted to protect the environment.” For me, the nail in ethanol’s coffin came with a recent CBC Television news report on results of tests done in Environment Canada’s own laboratory. Four fairly new vehicles were studied in a variety of driving conditions. Regular fuel was tested against a 10 percent ethanol blend. Results showed no statistically significant difference in greenhouse gas emissions from the two blends.

But even without weighing the environmental impact of ethanol plants, just how ethical is it in a world facing increasing demands on food stocks to be diverting such vast quantities of food away from dinner plates and into our SUVs and Hummers?

The Earth Policy Institute fears this whole ethanol exercise thrusts people and cars into a competition for corn. According to the Institute’s Lester Brown, “the grain required to make enough ethanol to fill an SUV tank is enough to feed a person for a whole year.” He warns that the ethanol boom could even plunge the world’s food economy into chaos: “The stage is now set,” Brown recently told a U.S. Senate Committee, “for direct competition for grain between the 800 million people who own automobiles, and the world’s two billion poorest people. The risk is that millions of those on the lower rungs of the global economic ladder will start falling off as rising food prices drop their consumption below the survival level.”

In fact, that may already be happening.

Reports of soaring food prices are coming in from throughout the world, brought about, in no small measure, by our fixation on ethanol. In March, the Wall Street Journal reported that “one of the chief causes of food-price inflation is the new demand for ethanol and biodiesel, which can be made from corn, palm oil or sugar. That demand has driven up the price of these commodities, leading to higher costs for producers of everything from beef to eggs to soft drinks. In some cases, producers are passing the costs along to consumers.”

Five years ago, the U.S.-based National Center for Policy Analysis issued a similar warning. The group estimated that by driving up the price of grain, ethanol was adding more than $1 billion per year to the cost of beef production for consumers. After all, it reasoned, the more it costs farmers to produce beef, the higher the retail price of the product will become. It also projected higher costs for other livestock products like milk and eggs.

Even the ailing Cuban leader Fidel Castro has gotten into the act, warning against the “sinister idea of converting food into fuel.” He has accused the Bush administration of toying with the lives of millions of people in developing countries who might starve because of the diversion of so much energy into fuel production for private vehicles.

Sadly, one doesn’t have to look far these days to see that all of these findings have fallen on deaf ears. Despite the cautionary tales, American farmers, motivated by climbing prices, are engaging in what can only be described as a frenzy of corn production, with much of it to be turned into ethanol. According to the U.S. Department of Agriculture, farmers intend to plant 90.5 million acres of corn this year. That’s the largest area since 1944 and 12.1 million acres more than last year. A side-effect of all of this has been a shortage of fertilizer for Canadian farmers. According to news reports, it is being snapped up south of the border to grow corn.

Conservation is the key

Why, with so much evidence stacked against ethanol, are governments so hell-bent on committing millions of taxpayer dollars to expand its production in the name of saving the environment?

Could it be that politicians and industry don’t really believe their own rhetoric that we must apply “science-based solutions” to our problems? Are they more concerned with the appearance of progress on environmental issues than with real progress?

The infatuation with ethanol may stem from an unwillingness to recognize that only a concerted effort to scale down our consumption—which will require a massive shift away from an economy based on endless growth—will begin to address the environmental challenges we face.

Many among us prefer to believe that some magic bullet, some technological fix like a grain-based fuel, will come along and free us from the obligation to actually reduce our energy demands. Unfortunately, as more is revealed about the plight of our planet and our unsustainable demands on its finite resources, it’s becoming frightfully clear that “business as usual” is no longer an option.

The agriculture industry is very energy intensive. Since fossil fuels are bound to peak and then eventually run out, surely real progress toward a sustainable future can only be made by transforming that industry in more meaningful ways than simply adding food to our fuel.

Larry Powell grows vegetables and writes from his rural home near Roblin, Manitoba. 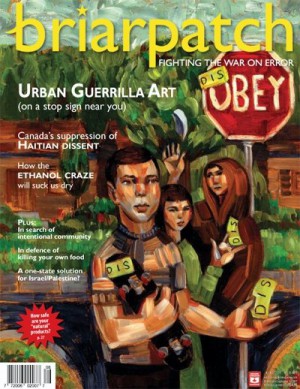