IT OFTEN SELLS FOR three times the price of gasoline, and more and more of us are guzzling it “” even though we can get the equivalent for next to nothing simply by tapping into the publicly owned infrastructure. It’s bottled water, and it’s a lucrative business. But why would we pay 240 to 10,000 times more for something that we can get for less than a penny by simply turning on a tap?

Marketing has a lot to do with it. As public concern over the state of the environment grows, private companies are quick to exploit those concerns with expensive individual solutions of dubious merit.

Bottled water sales are on the rise. A December 2006 report published by Sustain, a sustainable food and farming group, claims that bottled water consumption worldwide has increased 250 percent (from 58 billion litres in 1994 to 144 billion in 2002), largely as a result of successful marketing. The report says that bottled water is marketed as a fashion accessory for health-conscious consumers with discerning palates. Laurie Ries, a marketing consultant quoted in the Polaris Institute’s 2005 “Inside the Bottle” report, describes bottled water as “America’s most affordable status symbol.”

As bottled water is sold to the upper and middle classes, support for public drinking water infrastructure begins to trickle away. In 2001, the bottled water industry fought and won a dispute over a bill proposed to impose a five-cent tax on every bottle of water sold in Texas to fund improvements in the public water infrastructure. The same year, the World Wildlife Fund issued a report stating that the annual US$22 billion spent globally on bottled water could fund the municipal water systems of 2,000 cities with populations of four million people each “” more than the entire world population.

Even though business is flourishing and millions of people drink bottled water, the industry remains very loosely regulated. The US Food and Drug Administration has assigned “one half of a staff person (full-time equivalent) to bottled water regulation, and less than one to ensuring bottled water compliance” as cited by Eric Olsen, a senior attorney with the Natural Resource Defense Council, referenced in “Inside the Bottle.”

The Natural Resource Defense Council (NRDC) estimates that American bottled water plants undergo inspection once every five or six years, while the Canadian Food Inspection Agency estimates that Canadian plants are inspected once every three years. This lags significantly behind the norm for tap water testing in developed countries, where tests are run several times daily.

Adding to this discrepancy are the vast regulatory differences between the two agencies that regulate tap and bottled water in the US. The Food and Drug Administration (FDA) looks after bottled water, while the Environmental Protection Agency (EPA) regulates tap water. Although the FDA claims that it has adopted many of the standards of the EPA, a comparison of the two in a 1999 NRDC study proves otherwise. The study compared EPA and FDA standards and discovered some notable discrepancies between the two:

Although bottled waters are considered safe for human consumption, some can pose risks to individuals with compromised immune systems. Tap water carries little to no risk for such individuals and contamination issues are required to be made public immediately, while there is no such requirement for bottled water.

“So pure we promise nothing.” This is the slogan from Pepsi’s 2003 marketing campaign for their Aquafina bottled water. Oddly enough, this phrase leaks the truth about the relative purity of bottled water.

“To me, it’s like an epidemic” John Rudnickas, the manager of water quality for the City of Toronto, told Briarpatch. “A lot of people are saying they drink bottled water out of convenience, because I think they realize that they are being duped.” In 1999, the US Natural Resource Defense Council released a four-year study on 103 popular brands of bottled water and found that one-fourth were nothing more than bottled tap water, while one-third were contaminated with levels of toxins above state or industry standards. In 2004, the American Society of Microbiology tested 68 commercial mineral bottled waters sold throughout the world, and found that 40 percent contained bacteria or fungi, while 21 samples could support bacteria growth in lab cultures. The NRDC report concluded that bottled water is no better than tap water, and could even be worse, as tap water undergoes more rigorous testing, disinfecting and filtering processes and is required to conform to stricter EPA standards than its bottled counterpart.

In 1990, the Toronto Department of Public Health and the Environmental Protection Office conducted a study similar to that of the NRDC, comparing tap water, bottled water and water that runs though home filtration systems. The study concluded that due to stricter regulations and daily testing, tap water was the safest and cheapest alternative to bottled water. “The bottom line was that their recommendation was to drink tap water” said Rudnickas.

Both Pepsi and Coke admit that their bottled water is tap water that undergoes filtration processes. What they don’t mention is that one of their filtration methods can result in the creation of a toxic by-product. Ozonation is a filtration process by which ozone, a gas, is injected into water to eliminate bacteria and maintain freshness. When ozone is added to spring or underground source water (which contains the naturally occurring chemical salt, bromide) the carcinogenic chemical bromate can emerge as a by-product. In 2001, the FDA issued a warning regarding acceptable levels of bromate in bottled water, after which Nestlé stopped using the ozonation process in its Perrier sparkling water. According to “Inside the Bottle” Pepsi and Coke continue to use ozonation as a means to disinfect tap water in the US and selected countries abroad, though in 2004 Coca-Cola recalled 500,000 of its Dasani bottles distributed throughout Britain after the water was found to contain harmful concentrations of bromate.

Tap water undergoes more rigorous testing, disinfecting and filtering processes and is required to conform to stricter EPA standards than its bottled counterpart.

ALTHOUGH IT IS ASSOCIATED with pristine lakes, rivers and snow-capped mountains, bottled water inflicts substantial (and largely unnecessary) damage on the environment. Plastic bottles of water are transported to various parts of the world by fossil fuel-burning vehicles, and the bottles themselves are made of plastic derived from crude oil. The Earth Policy Institute estimates that in the US, 1.5 million barrels of crude are used annually for this purpose.

“Energetically speaking, the life cycle of bottled water is just ridiculous” says Dr. Keith Solomon, a toxicologist at the University of Guelph in Ontario. “In most first-world countries the local water is perfectly safe to drink.”

The problems with bottled water are compounded in developing countries, where the public infrastructure for water purification and distribution is often inadequate “” or even non-existent. International financial institutions, first-world governments, and the transnational corporations that stand to profit from lack of access to potable water have teamed up to pressure poor countries to slash public waterworks funding “” or even sell the infrastructure to a for-profit corporation.

As a key component of “structural adjustment” the International Monetary Fund and World Bank often make their loans contingent on the privatization of a nation’s water supply. In September 2001, the World Bank approved a loan for US$100 million for “structural adjustment” in Ghana. Before releasing the funds, however, the World Bank insisted that the nation’s government increase water and electricity tariffs by 94 to 96 percent to pay for “operating costs.” The government complied and as a result much of the population was not able to afford access to clean water. Currently the Ghana Water Company is leased to Aqua Vitens Rand Ltd., a product of the mergence of the Dutch water company Vitens with the South African water distributor Rand Water.

Many communities within the US and Canada are increasingly wary of allowing bottled water companies to deplete local water supplies to fuel their growing industry. Citizens of Maine, Florida, Wisconsin, New Hampshire and Ontario have all protested local and international bottled water companies that have wanted to set up shop in their towns and drain local water reserves for wider distribution. The Corporate Accountability International Organization reports that Coca-Cola, vendor of numerous bottled waters, has depleted water supplies in some areas of India, leaving affected communities struggling for survival.

Clean drinking water is already out of reach for over one billion people around the world. With water increasingly being sold as a private commodity, the lives of impoverished people in water-scarce regions are increasingly in the hands of corporations. But communities saddled with suddenly-sky-high water costs as a result of privatization schemes are fighting back. In 1999, the World Bank advised the Bolivian government to sell off its public water infrastructure to private corporations. With California-based Bechtel Corporation at the helm, the price of water in the city of Cochabamba suddenly doubled, and Bolivians took to the streets in protest. The resulting civil unrest “” the “water war” as it became known “” eventually forced the government to break its US$200 million contract with Bechtel in April 2000.

This scenario is not unrelated to the booming North American market for bottled water. Each time a bottle of water is purchased, transnational corporations, whose thirst for profit outweighs concern for public welfare, grow stronger. If the people of Bolivia had to resort to massive civic revolt to regain access to this vital natural resource, perhaps we had better start examining what sort of corporate practices our purchases endorse. We may discover that our future may not be that far away from the “water wars” waged in Bolivia.

Ashley Walters is a freelance writer based in Toronto. 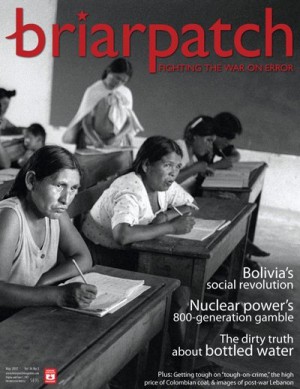 This article originally appeared in the May 2007 issue of Briarpatch.