Many consider the NDP to be the natural ruling party of Saskatchewan. Nevertheless, no government lasts forever, and voters seem to eventually tire of one party and decide the devil they don’t know likely isn’t worse than the one they do.

In Saskatchewan, the NDP seems to fare worst when economic times are good. This was the case when Grant Devine was elected in 1982. And when the Conservatives were unceremoniously booted from power a decade later, with a number of Cabinet ministers facing criminal corruption charges, the province had fallen back into hard times. Devine’s government had mismanaged its way into a debt that would plague the province for decades more.

Now, with a return to prosperity, the Saskatchewan Party under Premier-elect Brad Wall has been given the right to govern. Wall continued his party’s domination of rural Saskatchewan from last election, but added enough seats from urban areas to win a handy majority.

A party dominated by rural members of the legislature comes to power carrying the weight of rural expectations. It was those unfulfilled expectations that ensured the NDP would be shut out in rural areas. Unfortunately, as the NDP became more and more urban, it seemed less and less able to understand rural areas and their concerns. The most glaring failure concerned provincial roads. The Saskatchewan highway problem was nigh unsolvable given the previous financial state of the province. That changed in the past several years when Saskatchewan moved from have-not to have with the jump in oil and mineral revenues. Highways budgets began to increase, but the money largely went toward big projects, like twinning major trans-provincial routes. Despite greater expenditures, the average rural Joe saw no sign that his potholes were going to be fixed any time soon.

Another unfulfilled expectation concerned the decline of Saskatchewan’s small towns and rural population. Driven by the dismal farm economy, rural areas have diminished in number and stature. The NDP generated lots of talk around the issue, with groups like the Action Committee on the Rural Economy, but the solutions never seemed to go anywhere. One of ACRE’s first and simplest suggestions involved extending high speed internet to all rural areas. That idea has gathered years’ worth of dust and moved at a snail’s pace.

Perhaps most galling to farmers has been the NDP’s unwillingness to deal in a timely manner with the issue of school taxes. Funding for school divisions has long fallen onto property taxes. The provincial government, in deficit-cutting mode, had thrown more and more of the funding for schools onto property owners. This might be somewhat equitable in urban areas, where the value of your property reflects at least somewhat your ability to pay. In rural areas, owning farmland has in no way reflected the ability to pay in recent years, as farm incomes have collectively been negative for a decade. An average farm found itself paying more toward school tax than the owner of a mansion on Regina’s Albert street. This issue has been a no-brainer for years, but the NDP first ignored it, then finally put forward a temporary, half-hearted solution. This only increased rural resentment, and rightly so.

Fixing rural roads, stabilizing the rural economy and bringing fairness to the school tax system are but a few of the expectations the new Premier will find on his doorstep. On the first one, Saskatchewan voters may be in for a surprise. The election promises of the Saskatchewan Party contained only modest spending increases for provincial highways, compared to expenditures under the NDP. It is nowhere near enough to make a dent in the highway problem.

As for the rural economy, rising grain prices may improve the lot of one sector of agriculture, if they remain at higher levels. They are, however, a mixed blessing, as they are largely responsible for plummeting livestock prices. The cattle and hog sectors in Canada are taking a severe beating as prices for calves and hogs have fallen to unsustainably low levels. Though responsibility for this should perhaps fall mainly on the federal government, the provincial government will reap the fallout if solutions are not found. Both federal and provincial governments share a similar view that markets should be allowed to function with little intervention. This will not work for the livestock sector today. Saskatchewan stands to lose cow-calf producers, feedlots, auction facilities and hog barns if the current situation lasts even one more year.

The new government of Saskatchewan will be measured by its response to basic rural concerns. If it fails to make some very positive moves, the people of Saskatchewan may not wait as long as usual before voting it out. 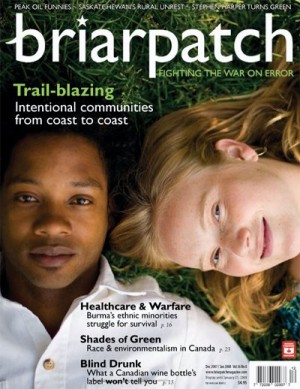 This article originally appeared in the December 2007/January 2008 issue of Briarpatch.