“We bury our children in this country every day. We have to force them to drink polluted water. We’re sick and tired of it. It’s going to end-June 29 is going to mark the time when First Nations people are going to be in a different relationship with the rest of the country.”

This issue of Briarpatch is about you.

This is true whether you happen to be a recent immigrant, a refugee, a WASP civil servant or a Cree elder, whether you live in a major urban centre or a remote northern community. If you live anywhere in the western hemisphere, in fact, then “indigenous/settler relations” involve you.

This is no different from our recent gender issue, of course. Canada’s colonial legacy is not just a “First Nations issue” any more than gender inequality and gender violence are only “women’s issues.” Such issues affect us all in distinct and significant ways, and we all can and should take steps to alter the resulting relationships for the better, both in our personal lives and within the institutions that claim to represent us.

For those of us willing to work in good faith towards this new relationship, Shawn Brant’s challenge, above, should not be seen as a threat but an opportunity-an opportunity to right a wrong and to enter into a new relationship with the original inhabitants of this land. But because righting this wrong requires standing up to injustice and reasserting rights that have long been ignored or brushed aside, the formation of the “new relationship” that Brant speaks of will by necessity often express itself in terms of conflict or adversity rather than harmony and cooperation. The question, for those of us not directly involved in this struggle, is with whom we choose to align ourselves when the assertion of indigenous rights leads to conflict-the colonizer or the colonized.

Many indigenous communities across the country have witnessed a remarkable cultural renaissance and political awakening in recent years that offers tremendous hope for the future. But these communities are now facing incredible pressure from governments and police forces for reasserting their rights to the land, and this pressure will only grow unless settler activists become much more vocal and involved in seeking equitable resolutions to disputes. To quote from Jonah Gindin’s article in this issue, “Until non-Natives are blocking highways and railways in direct solidarity with their Native brothers and sisters, indigenous struggle will most likely be met with state-sanctioned violence and repression, and Shawn Brant’s call for settlers to establish a new relationship with Native peoples will remain unanswered.”

It is my hope that the articles collected in this issue can contribute in some small way towards the realization of this new relationship. 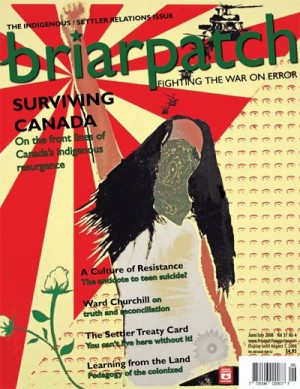 This article originally appeared in the June/July 2008 issue of Briarpatch.