On a snowy November day in 2007, my husband and I walked into the office of our local Manitoba Public Insurance representative and spread our birth certificates, marriage certificate, and SIN cards across her desk. We were determined to disrupt the cycle of male domination and hoped to gain the government’s support. Eric and I had spent four years as de Waals before realizing that identifying ourselves with his birth name didn’t reflect either our convictions or our relationship. So we decided to become Penner de Waals.

When applying for new SIN cards two months earlier, our rumps had become numb from sitting while a Service Canada agent argued our case for a name-change-due-to-marriage to her superiors. Now we were repeating the experience for driver’s licences. My hands dripped with sweat while the MPI representative squeezed her phone between ear and shoulder, stuck on hold as her higher-ups decided our fate.

Feminists have been grappling with the surname-after-marriage issue since the mid-nineteenth century, but despite claims of progress, women are still taking their husbands’ names in droves. University of Florida linguistics professor Diana Boxer estimates that 77 per cent of American women adhere to this tradition; she believes this “reflects how men’s power continues to influence American society.” A browse through Internet forums suggests the proportion of women who take their husbands’ name is similar among Canadians. Even many women who keep their names after marriage have no problem giving their children solely the father’s surname.

When we first contemplated changing our last names, Eric and I thought the portmanteau Waalner would achieve our goals, but in a simpler form. My father-in-law derided that idea, convinced it would erase Eric’s entire Dutch heritage, and suggested I revert to my original surname. He knew many women who retained their names after marriage and believed it was important they preserve their identities.

A woman’s surname choice after marriage – whether to hyphenate, or take her husband’s name, or keep her own – no longer compels anyone to question the current status of women. Women asserting authority have become somewhat socially acceptable, but most people still cannot fathom the idea of men relinquishing authority at such a fundamental level. Releasing the “right” to give his name to his wife and children, and even to keep it himself, is one bold way a man can deny his social entitlement to oppress women.

I’m not suggesting all men should trade their surnames for their wives’. A simple reversal of the current system would continue to promote gender inequality. Nor is it appropriate for every man to change his name at marriage. But a creative approach to last names needs widespread consideration from both women and men determined to challenge the status quo of patriarchy. Restricting heterosexual couples to one choice (she either takes his name or keeps hers) simply perpetuates the idea that only women need to fight for gender equality.

If enough people abandon the idea that one size fits all when it comes to family surnames, discussions about the latest marriage or birth could become places of thoughtful dialogue. People will be forced to ask what surname was chosen and why, rather than assume that traditional customs were followed.

Eric and I are told that if our (hypothetical) children marry people with two surnames they will have four surnames. We’re told that’s absurd, despite the Portuguese, among others, living problem-free with two to four surnames. Or we’re told that our children will remove one of those surnames we worked so hard to keep. When we respond that our children and their future spouses will have to decide what surnames best suit their partnerships, the skeptics shift uncomfortably or continue quizzing us, uneasy with this ambiguity.

Perhaps our children will hyphenate, or possibly create an entirely new name. Maybe each spouse will keep their original surnames, but give their children a last name that represents a family member – a cherished maternal grandmother’s first name, for instance. Or they might resurrect the original surname of an ancestor from another country. (All real-life examples.)

Eric and I finally had our name change authorized at the MPI office and were told the delay had been caused by confusion surrounding Eric’s choice. Most people who heard about Eric’s new name expressed similar bewilderment: You changed your name?

When Eric explains that he took his wife’s name and she took his, people watch gender equality veer from lofty ideal to jarring reality. In a five-minute exchange with a receptionist, Eric can spark thoughts about male/female relationships that I as a woman never could. I am humbled to see him campaign for my rights, but heartened a man would challenge a system that gives him immeasurable power. And I know he is not alone. 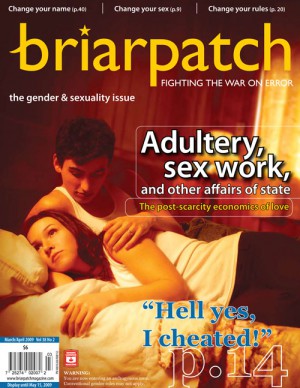